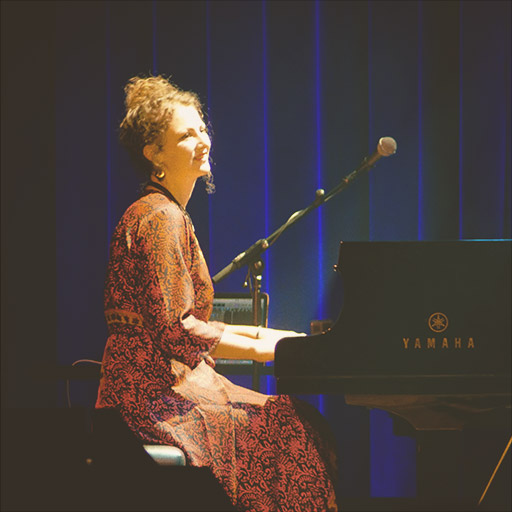 Linde Tillmanns (1998) is a composer, multi-instrumentalist and singer/songwriter from the Netherlands. She seeks to explore new harmonic realms in her music, drawing on her curiosity and imagination.

Having grown up with traditional music from across the world as well as rock and pop music, she later drifted in to the modern- and spiritual jazz world. Her music therefore has many influences; African, Swedish, Brazilian and Irish music; neosoul artists and producers like Hiatus Kaiyote, FKJ and Gallant; pianists such as McCoy Tyner, Tigran Hamasyan, Aaron Parks and Alice Coltrane.

Linde graduated from the Utrecht Conservatory on the 19th of june 2021 in Cloud Nine, TivoliVredenburg. This concert hall is also where she was an intern in 2018/2019, booking acts for the Rabo Open Stage. In 2019/2020, she went on an exchange to Aalborg, Denmark to study Jazz piano. Her education in Utrecht was called ‘music performance artist’ and entails finding one’s musical voice, working with other disciplines and thinking conceptually. Next to keys she plays guitar, violin, percussion and sings occasionally.

Linde is planning to release an EP with her band in June.
Next to that, she is playing in a variety of other projects and employed as a piano teacher.